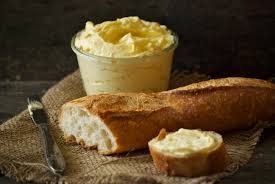 The Story of Butter

To quote a familiar adage, things are not always what they seem. We know that Abraham fed “Chem’ah” to the visiting angels— but was it really “butter?” Rashi (Genesis 18:8) explains “Chem’ah” as “the fat which one collects from the surface of milk,” which implies that it is cream and not butter.

The Targum seems to concur by translating “Chem’ah” as” u’Sh’man” (fat), perhaps the cream that floats on the top of milk. Rav Aryeh Kaplan z”l feels that the verse is referring to “cottage cheese”; he leaves it to the Septuagint to translate it as conventional butter (The Living Torah, loc. cit.).

Interestingly, some editions of Rashi translate it as buerre—the French word for butter! Rav Dovid T’zvi Hoffman z”l argues that “Chem’ah” originally referred to a fermented milk product (leben?), derived from the word Cham’ah. Clearly, things are not always as they seem.

Biblical exegesis notwithstanding, the term “Chem’ah” used in Halacha (Jewish law) clearly refers to butter as we normally use the word today. “Classic” butter was considered an inherently Kosher product, even to the point of many authorities considering it exempt from the restrictions of Cholov Yisroel. Modern food-processing technology, however, may have foiled this erstwhile pristine heritage, and today’s butter may no longer enjoy such a status in either respect.

Butter is classically made by churning fresh dairy cream so that the butterfat flocculates (clumps together) and forms butter, leaving buttermilk behind (more on but termilk later). Butter contains about 80–85 percent butterfat, the balance being water and other milk components. (A new process for the production of butter involves separating butterfat from cream using high-speed centrifuges, after which the butterfat is cooled in a surface-swept heat exchanger [“Votator ®”] in a process similar to the production of margarine.)

Although fresh dairy cream may be inherently Kosher, the Kosher status of other sources of cream is far from secure. Whey, the byproduct of cheese making, contains a significant amount of butterfat that is collected and sold as whey cream. Mozzarella cheese processed in the classic pasta filata manner is cooked in a hot-water bath, and the fat that leaches from the cheese into this water is also recovered and sold as whey cream (although this terminology is not wholly accurate). Cream from both these sources is used to manufacture butter, and each has its own Halachic issues.

Although several Halachic opinions exist concerning the status of whey from G’vinas Akum, many authorities believe that such whey must come from cheese productions that use Kosher rennet and do not allow the whey to be heated above 120°F (Yad Soledes Bo) together with the curd. Cream that is recovered from the cook water of non-Kosher mozzarella cheese—for which the cheese is cooked to temperatures well in excess of Yad Soledes Bo—is not acceptable. Because both these types of cream are used to make butter, appropriate safeguards must be put into place to ensure that butter approved for Kosher use is not subject to these concerns.

The USDA has established a grading system for butter. Grade AA is considered the highest quality, followed by Grade A, Grade B, and lower qualities. The basis for this grading is organoleptic (one of taste); the milder the taste, the higher the grade regardless of the type of cream used. (Ironically, the butter with the more “buttery” flavor is graded lower than its blander cousins.) Although fresh dairy cream has the freshest taste and is best suited for the manufacture of Grade AA butter, it is also the most expensive.

Whey cream suffers some degradation during the cheese-making process and typically has a stronger flavor, but it is also less expensive. Butter makers are adept in blending various grades of whey cream to obtain a Grade A, or even a Grade AA, butter from less-than-pure, fresh dairy cream. Research has confirmed that we can no longer rely on the assumption that Grade AA butter is free of questionable cream. Consequently, butter is no longer considered an inherently Kosher item and its Kosher status must therefore be verified.

Please also note that “butter oil” and “anhydrous milk fat” are made from butter, which is heated and filtered to remove the milk curd and moisture. Kosher concerns for this type of product are complicated by the fact that the typical butter used for this purpose are the lower-grade materials, the type most often made from whey cream.

Other issues relating to “pure” butter involve the use of various ingredients added to the product. Historically, butter was preserved in two ways, which account for the two basic types of butter sold today. One method of preservation involved the addition of salt and people therefore developed a taste for salted butter.

The other type of butter, commonly known as sweet butter, is actually a misnomer. To preserve butter without the addition of salt, the cream from which it was produced was clabbered (fermented), which allowed for the development of lactic acid in the cream. The lactic acid not only acted as a preservative but also gave the butter a particular tang. Today, this flavor can be introduced into the butter by adding lactic acid–producing cultures, starter distillate, diacetyl, or commercial lactic acid.

Although these ingredients may be Kosher, they may compromise the exemption that, according to many opinions, butter enjoys from requirements of Cholov Yisroel. Chaza″l (the Sages) had established that milk from non-Kosher species of animals could not be turned into butter; hence, there was no need to supervise milk used to make butter (the rationale for Cholov Yisroel—”supervised milk”). Dairy flavorings, however, could just as easily be produced from non-Kosher milk and would indeed be therefore subject to the rules of Cholov Yisroel.

As extra food for thought, note that “cream” may not be pure cream and “buttermilk” may have nothing to do with butter. “Whipping” cream often contains emulsifiers, gelatin, and other ingredients—clearly not the fresh cream your (grand) parents may remember skimming from the tops of milk bottles. Unless one can verify that a cream is pure, assume that it requires reliable Kosher certification from a recognized Kosher certification agency.

Buttermilk also comes in two categories. True buttermilk is the fluid left over after churning cream into butter. This is generally the “powdered buttermilk” used in industrial applications such as ice cream and baked goods. Such buttermilk is subject to the same Kosher certification considerations as the butter discussed previously. The “buttermilk” sold in the refrigerated section of the supermarket, however, is usually completely unrelated to butter manufacture. It is actually called “cultured buttermilk” and is made by adding a culture to skim milk, along with emulsifiers and stabilizers that may include non-Kosher glycerides and gelatin. Clearly, such a product requires a reliable Kosher certification from a recognized Kosher certification agency.

Food chemists are quite resourceful in the dairy industry as in all areas affecting the food supply. “Pure and wholesome” staples are not necessarily as simple as they may seem, and the Kosher professional must be ever vigilant in ascertaining their Kosher certification status.